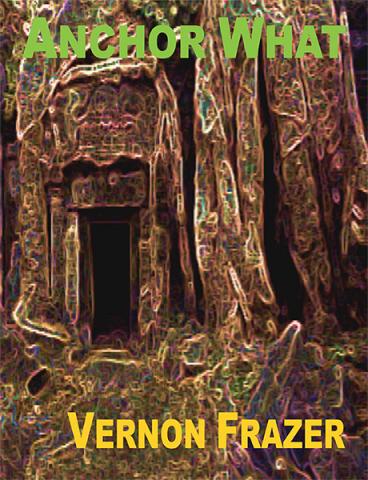 Buy it now on Bookshop.org or Amazon.com

Unlikely Books is proud to present ANCHOR WHAT, the new 100-page book of visual and typographic poetry by Vernon Frazer!

In ANCHOR WHAT, Vernon continues to explore his unique and ever-shifting take on vispo, taking word processing software in directions it never thought it would go: 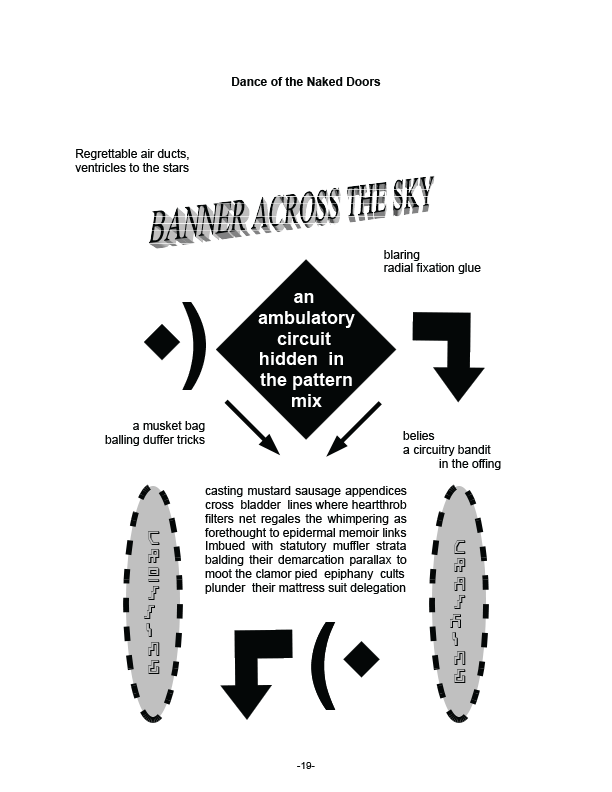 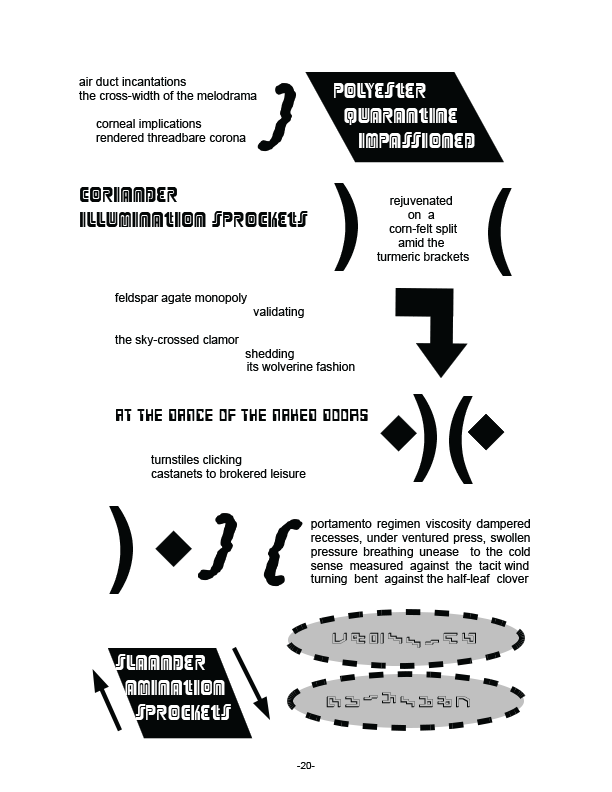 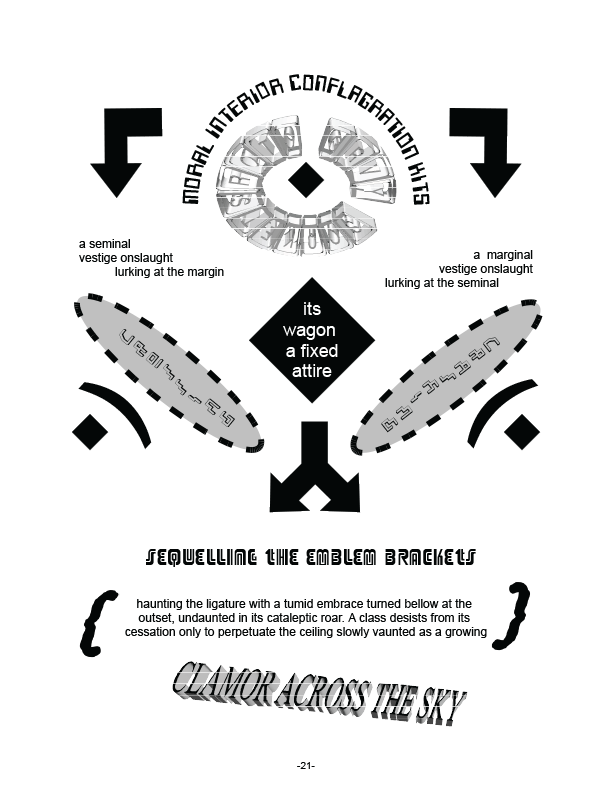 Check out what people are saying about ANCHOR WHAT:

"Photographed from a distance, the ancient temple city of Angkor Wat rises up—a complex architectural achievement—from the lush earth of Cambodia. The entire is visually fascinating and spiritually profound, as if having emerged spontaneously and whole out of the churning "Sea of Milk" Cambodian creation. The city's meaning must be huge, eternal, and blindingly clear. In his new, large architecture ANCHOR WHAT, Vernon Frazer trains an unnerving gaze on the meaning of our uncertain times. Indeed,What does Anchor our bodies, minds, and souls in anything more substantial, even infinite? In the roiling shapes, patterns, paths, fonts, and phrases of Frazer's collection, a strange, terrible epiphany struggles to rip itself free, to focus, to announce itself."
—Joel Chace

"Vernon creates new work at the intersection of visual art and literature, digital text, image manipulation, modern printing. His visual poetry is full of syntactic play and sound effects. It catches the eye before it is read. When read we are caught up in active verbs, energy pushing language into new spaces. Vernon Frazer's visual poems at best are framable art, beautiful to behold, hormonal word groupings on recreational drugs. We don't read these for meaning. They are self-contained energetic events."
—Belinda Subraman

"Vernon Frazer's visual poems have something to do with futurist "words-in-freedom" as well as with classic ads in constructivist style, and with flow charts, used for scientific demonstration in the digital era. (Imagine a surrealist's dream of a flow chart though.) Those are the (combined) sources no poetry could be more different from, than his. The urge (dynamism, conviction, interest) of leading the reader from one place to another on the two dimensional page, is replaced by the virtuoso scepticism of a quick and playful spirit, with absolute pitch for unexpected melodies, which just happen in sequence-long trips, say, from "iconic mirages" to "ironic mirages". Those trips might result in real insights, even if we can't cling to them, or rather, that is why. "VISIONS/ PURSUED/ BEYOND/ THE/ MEANS", "MEAN/ VISIONS/ PURSUED/ THE/ BEYOND", "BEYOND/ THE/ MEAN/ VISIONS/ PURSUED".
—Márton Koppány

"A page is scored. Between the score card and the dance card the music plays on. When we say "the music" seers the score card, aren't we telling you what we see? I see as much as I believe and believe only half of what I see because I haven't heard the whole of the composition yet. And in this, when and if you chance to idle over the pages of Vernon Frazer, understand the use of repetition as a musical principle and not a culturally linguistic finitude. Then it'll be your turn."
—t thilleman

And consider the introduction by publisher Jonathan Penton:

Humankind's greatest technological achievements—including math, music, and, painfully enough, the Internet—are often described as languages. Our most important trait, as a species, is our desire to expand our own minds—to use languages—be they languages by the narrowest definition or other collections of metaphors and symbols—to advance our collective abilities beyond the capacities of our individual bodies and brains. Art is a necessary subset of this behavior, and a necessary precursor to science and technology. This is sometimes obvious, such as when science fiction predicts—and thereby creates—technology. More fundamentally, art is the process by which we expand our understanding of metaphor, and metaphor is an essential component for complex tool use: the process by which we activate our human ability to mentally connect disparate physical realities and translate them into technologically useful sets.

At this point in history, we have the privilege of watching a huge linguistic shift in real-time. "Memes" have arisen; the word has been redefined accordingly into the inherently metaphoric activity of pairing images with tangentially-relevant sub-English captions. William S. Burroughs' "word virus" now refers to the propagation of said memes. Grown adults have entire conversations in emojis. In public. Each of these linguistic shifts starts with an intent to a more direct means of expressing a very specific type of thought, but as their abilities (and the response to them within Facebook's prioritizing algorithms) become more apparent, they are stretched and repurposed with amazing speed. New mental connections are formed and made universal—extending beyond the confines of the "real" languages that facilitated their construction in weeks, days, or even hours.

To the degree that I understand any of it, I owe my comprehension of this phenomenon to the visual poetry of Vernon Frazer. In 2005, Frazer released IMPROVISATIONS: a 700-page longpoem of visual and typographic work in which he started with the word "IS" and proceeded to deconstruct the concept of language, telling a unified narrative which began in English and ended in a comprehensible cypher of wingdings. That is to say: Frazer wrote a longpoem using the typographical oddities he found in WordPerfect and used it as its own translation guide in a way that was readable and pleasing to the eye. If that sounds difficult to read, it's really not: IMPROVISATIONS is thoroughly immersed in jazz and playfulness, and while it's certainly massive, most pages can be appreciated simply as visual pieces: as Belinda Subraman says, "self-contained energetic events." It is not necessary to crack Frazer's code to appreciate his pages.

IMPROVISATIONS is, on the other hand, painfully difficult to criticize. I did my best a decade ago, but now find myself just as intimidated in my attempts to introduce Frazer's new book of visual/typographical poetry, ANCHOR WHAT (a reference to and corruption of the 800-year-old temple in Cambodia, Angkor Wat). Certainly, ANCHOR WHAT deserves its own introduction and analysis, but IMPROVISATIONS casts a formidably thick shadow (a little over 4cm thick, at its source). How do we approach the current typographical experiments of a man who so thoroughly re-envisioned what such typographical poems could mean?

My anxiety probably means that I'm in danger of losing the plot. After all, it is not the purpose of IMPROVISATIONS to create a codebook that will allow people to communicate in visual poetry; a guide by which technical writers shall design software manuals in vispo. Although I maintain it could be used in such a way, its purpose is to communicate as poetry, which is to say: to communicate those things that are best communicated by poetry: not the technical specifications of jargon, nor the party-hangover cycles of emojis, but transcendent emotional states too complex to be adequately explored with our everyday vocabulary. All poems seek such expression, and experimental poems seek to express those sublime states at the outermost edges of rational thought. Such thought processes are associated with spirituality, ecstatic religious practices, and direct connections to the divine, making the title of this volume both slyly unexpected and thematically obvious.

That said, the title ANCHOR WHAT, despite having no literal meaning, is in some ways more immediately comprehensible to the English-speaking Westerner than the name "Angkor Wat;" the former feels directly connected to banausic frustrations and ennui. The book's content is immediately and easily connectable to a very ordinary emotion: rage. Anger has been an undercurrent in much of Frazer's work, and we can see flashes of it throughout his visual poetry. It is more central to his 2002 satirical novel,Commercial Fiction, and his 2004 urban mediation, Avenue Noir. But ANCHOR WHATtakes Vernon's anger, hardens it, focuses it, and transforms his typographical work into an entirely different milieu: that of sociological monograph, vispo style.

Consider the piece "Parchment Grudge," "whose text assumes renewed vitriol." Fused together with medical metaphors, it supports a direct emotional response to the way we endure commonplace injustices in a framework of sociopolitical madness. Swirling in its paragraph-blocks and word-curvatures you'll find the who, what, where, when, and even the why and how of its subject matter, though "Parchment Grudge" is very far from journalism, and expresses post-democratic philosophies both more obscure and more basic than the endorsement of a candidate. Musings such as "The haunches stir at twilight under a bedlam filled with culpable analogy surgeons radiant as narrative splenectomy tendons free translucent rampage buttons on harsh vestibules of tentacular night," (comma in original) offer us a mental framework that rejects the nihilistic viciousness of our political discourse by offering us a far more fastidious nihilistic violence. "Parchment Grudge," like much of ANCHOR WHAT, elevates the most base of psychic phenomena. In this way, it is a dark counterpoint toIMPROVISATIONS' euphoria. Joy is certainly present in ANCHOR WHAT, but it is suffused within and quieted by an ecstatic exploration of hatred and despair. I do not exaggerate when I say, that, if you happen to be a character in the original Star Trekpilot, ANCHOR WHAT can save your life.

In the event that you are, instead, a 21st Century fan of visual and typographical poetry,ANCHOR WHAT is a thrilling opportunity to reformulate vulgar political concepts into super-lingual expressions of need and contempt. Traditional language—indeed, conventional poetry—cannot do what Vernon Frazer has accomplished in ANCHOR WHAT. IMPROVISATIONS blew off the top of my head, reminding me of the beautiful thoughts available to me if I let go of the thought processes that keep me flightless.ANCHOR WHAT reminds me that I was always headless in the first place—but tells me in such a uniquely sophisticated way as to imply exactly what and where my headcould, and therefore arguably should, be. In the time and place in which Frazer is writing, I'd far rather have political candidates aware of ANCHOR WHAT than Thomas Paine's Common Sense: Vernon Frazer's sociopolitical madness is both more grounded and more sublime.

Buy it now on Bookshop.org or Amazon.com