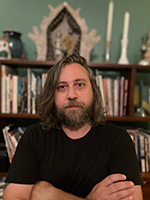 Christopher Shipman is the author of The Movie My Murderer Makes: Season II (The Cupboard), coauthor of Super Poems II (Kattywompus Press), and coauthor of Keats is Not the Problem (Lavender Ink). His work appears in journals such as Cimarron Review, PANK, Pedestal, Plume, Salt Hill, Spork Press, and TENDERLOIN, among many others. He is the author or coauthor of five books and four chapbooks. His poem, “The Three-Year Crossing,” was a winner of the 2015 Big Bridges Prize, judged by Alice Quinn. _a ship on the line (2014), coauthored with Vincent A. Cellucci, was a finalist for the Eric Hoffer Award. Shipman lives in Greensboro, NC with his partner Sarah K. Jackson and his daughter Finn, where he teaches literature and creative writing at New Garden Friends School and plays drums in the band The Goodbye Horses. Learn more at CShipmanWriting.com.