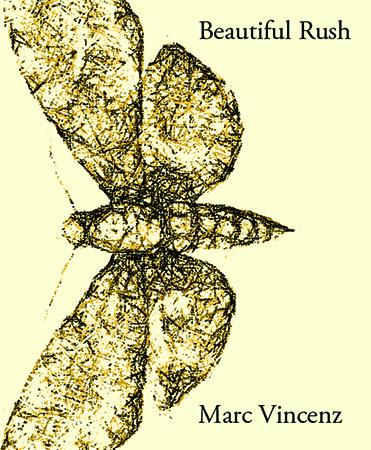 Unlikely Books is thrilled to present the winner of the 2013 Unlikely Mississippi Award, Beautiful Rush by Marc Vincenz!

Beautiful Rush is the follow-up to last year's Gods of a Ransacked Century, featuring a return by cover artist Inga Maria Brynjarsdottir and the layered love poems of Marc Vincenz. Check out the Foreword by Kimberly L. Becker:

"Ears open, I wanted so much to listen." If, as Heschel said, the prophet is one whoemploys notes one octave too high, then Vincenz has transcribed what he has heard—including "ancient bone music, / skin songs / and marrowed incantations"—so that we can listen in. Vincenz is attuned to what most of us miss in "the song of the world." He listens until he hears "something / like knowledge, clearing its throat" and beyond that, in "a vast underground of pure silence," also "a language called stillness" beneath our human babble.

Cassandra's prophesies were doomed not to be believed and even the "river-wind draws a long sigh of disbelief," but Vincenz' readers are fortunate: his is a poetry of elegant hermeneutics, an ontological exploration as Vincenz is "on the search for stories of creation." He poses questions that expose inherited myth ("Why on earth / does life begin / with a single bright fruit?") and test our perceptions ("To watch a flower bloom / or a cloud fatten may be near impossible but how do you distinguish movement away or toward from the growth of billowing form?"). Yet the book is never ponderous, often humorous, eschewing what "sounds more or less like New Age claptrap." This is poetry that matters through its very quest for meaning: "Isn't there a potential for chaos in everything we see and touch? Where's the meaning in that?"

This tightly structured and imaginatively expansive work is akin to an Escher staircase, where laws of gravity are suspended so that we ascend and descend, holding the handrail of impeccable lines, stopping to stand in stanzas of timelessness, some of which lead "out of that honeycomb of life and enter that other world where there are no numbers to contain all of this." Vincenz reveals kairos within chronos and the "swathes of time steeped in eternity's teapot." Highly olfactory, from the realistic—"sweat, / perfume, fungal spores"—to the fantastic—"the fragrance of significant things / that appear to exist only in the mind, no more"—Vincenz follows his nose to the primordial source and we gladly follow him, even as we are impatient for more gnosis ("I know, I know, you want clarity, an illuminated mind, / not those fleeting visions of a future not yet born.") If death is the mother of beauty, then Vincenz fathers beauty further. WithBeautiful Rush, he has achieved what "seems like immortality." This book is a must-read that must be read to be believed. If "to be outside of convention is the ticket,"Beautiful Rush is a unique creation, a daring and gorgeously realized work, wherein "words are tuning forks ringing inside / glass minds." At times oracular, always spectacular, the beautiful words in Beautiful Rush will long resonate inside readers' minds.

And enjoy the Afterword by j/j hastain:

"What is it really to be honest?" And why would we really be honest? To root in a particular geography of self at the same time as proposing more macro geographies in which the particulars of others can roost? For the sake of time seeking real time by way of sensory stories, by "words as tuning forks," by briny rhymes?

Are some people's poems sacred scars? Marks of the page as quirks in a day, as scratches into the body for meaning? Etches in a headboard. Drag marks from outstretched finger along a foggy window ("where I am not yet dead/where I am not quite born"). Curls made in hair ("your hair still cascades in both of our eyes"). Cracks made in the counter from slamming down a dish. Sneaker streaks pushed into the mud.

Who watches as our days pass us by? "Bioluminescent ghost[s]?" Who notices when we get caught in the crannies of the quotidian? And who etches into their own forms for retention, in acknowledgement of us, when those catches of many types present as beauty?

Vincenz' Beautiful Rush is a belaboring of the details of daily life in an effort at synthesizing them for beauty, from cliché. It is hard to live. It is hard to write living. Why then are we pulled to write it? What are we hoping to contact? What is worth this effort?

Vincenz' "intentional concern is to get a hearing," to hit the "mother lode:" a place where the wealth of somatic resonances can exist, can thrive even while cancelling certain things out. Where "hot fingers move fast," the "Buddha's barbed tongue" is eating out "the I in her." By "damaged magic" "the snake sheds its skin as the moon sheds its shadow." Led by sweat and perfume, by the foulness of the city "where artists seek the ears," we encounter the slow motility of days as they attends to figures, are attended to and brought near by certain attentions.

Reincarnation, melancholy, meals, small deaths, "eloquent prayers," "silent grave digging," this book rings with the most human of poems. I define a human poem, as a poem that "hear[s] voices in hard labor," that can admit its kinship to various shortcomings, needs for anesthetic. Human poems are poems capable of working with their imagined others wherein something/ entirely inhuman, entirely unheard of," can be met, reckoned with. For what is it to be human, beyond the seeking out of home? Beyond "a language called stillness, a child called language?"

The umlaut, in its subtle morphology, reveals roots: the secret (sacred) lives of our body parts in tandem, in multiplicity as they animate our bodies. "There is no morning," and the "frayed child's book" is flipping us as travelers, through personal names, personal moments ("your face in my hands growing old"). "I'm swollen from [this] excess," just as I had hoped to be: calm as I die in small bits every day. There is a pristine fulfillment in dying like this, alongside the language: its lips, the rips, so many riffs. 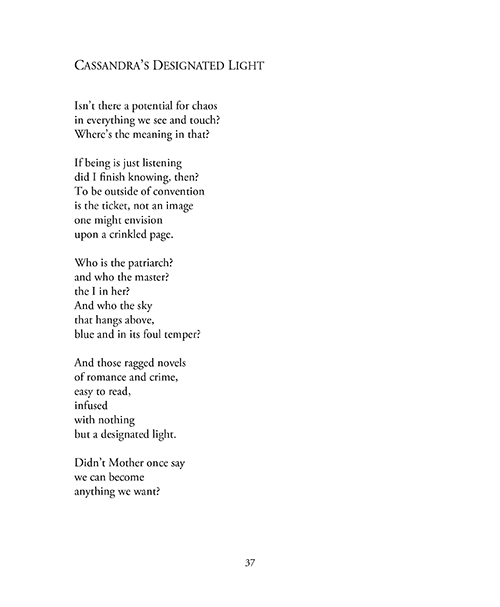 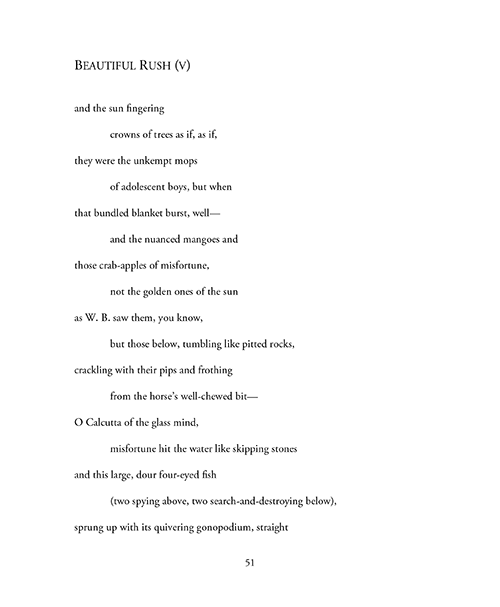 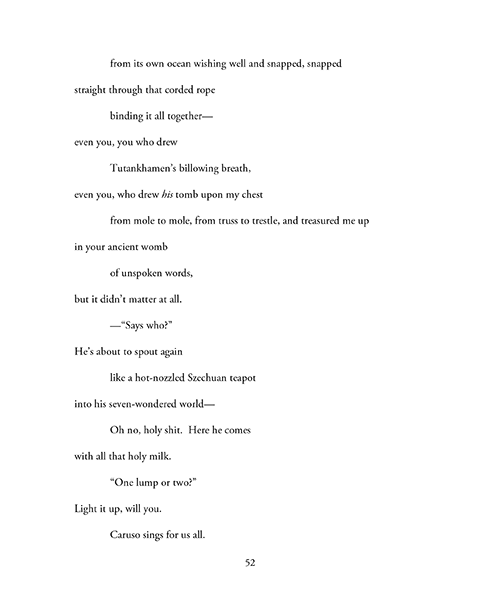 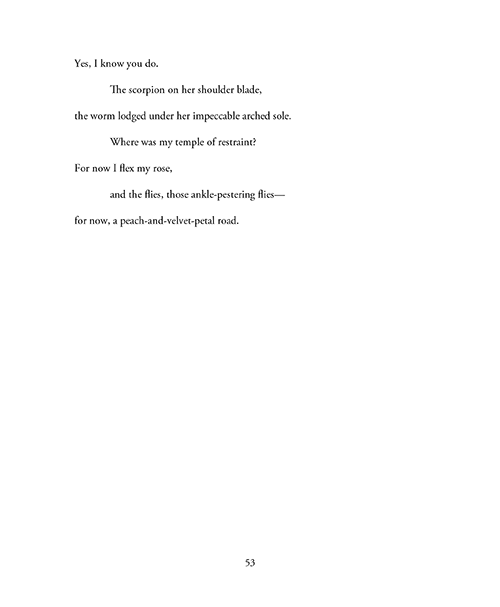 Here's what people are saying about Beautiful Rush:

"To 'write an ode at all,' one speaker laments, in Marc Vincenz's Beautiful Rush, which 'sings the song of the world' as it guides us along the 'peach-and-velvet-petal road' of its gorgeous, philosophical investigations into 'the birthing of suns,' nights 'of excess,' 'shimmering gold' skies, 'war scars,' 'crab-apples of misfortune,' 'ancient bone music,' and 'the blood of wilderness.' Every poem is a celebration, an exaltation of the 'potential for chaos' amidst the 'rapture of being alive.' Thus, Vincenz accomplishes the task—inBeautiful Rush, he has written a multilayered, multi-voiced, and meticulously examined 'ode to Beauty.' Read it, and wonder at the world again."
—Molly Gaudry

"Marc Vincenz's Beautiful Rush is a vertiginous read, a spellbinding, fascinating new poetry collection exploring 'the rapture of being alive' and 'murmuring / ancient bone music, / skin songs / and marrowed incantations.' Sophisticated, profound and inventive, it awakens the reader to a wildly intriguing journey encompassing beauty, presence and absence, death, ghosts, memories and dreams, ecstasy and nothingness. Written with incisive and confounding intelligence, wit and impertinence, 'with the blood of wilderness,' Beautiful Rush transports us to 'the marvels / beyond time straight / into the face / of a dimmed / inarticulate world' and 'the color / of pure silence— / that rainbowed tint / when night swallows reflections.'"
—Hélèna Cardona

"What gorgeous poems Marc Vincenz has written. He speaks to us in a sensual, vivid, and measured eloquence. You may flinch at times as his poems do their work—or you might be thoroughly delighted by an image, or a beautifully assessed line. Either way, you will leave this book feeling utterly invigorated."
—Yussef El Guindi

"Let the reader find truth and heed the Cassandra warnings of our age, mad though they may appear. In Beautiful Rush, Marc Vincenz invokes the spirit of Cassandra, Simenon, H.G. Wells and others to make prophetic and finely tuned poems, modern yet compelling as the ancient curse poems of classical times—so that we, in Vincenz's words, 'never / turn out the light /on the wilderness /of our future.'"
—Morgan Harlow

"In Beautiful Rush Marc Vincenz conjures a grand, old lyrical voice, sometimes the result of deliberate imitation and here and there punctuated by contemporary irreverence. This voice encompasses romantic love, love of the particular, and (our current bogeyman) gestures toward the universal. Vincenz has delivered a tightly crafted and overwhelming book."
—Hugh Tribbey

"In Beautiful Rush, Marc Vincenz marries the inexorable passage of time to its polar opposite, beauty; to the ephemeral 'fragrance of significant things.' This is a collection of generous, tender lyrics, of 'ancient bone music,' a powerful read."
—Lynne Thompson

"Marc Vincenz' poems are edgy, fresh, well-crafted and moving. The voice behind the poems is skeptical, if not cynical, while its shadow between the lines is poignant with the pain of living now. Wielding the 'fine toothed comb of perception,' Vincenz, particularly in the series called 'Beautiful Rush,' which is woven throughout the book, allows us to experience the mystery of his journey, its doubts, its occasional epiphanies."
—Gail Entrekin

"Does the death of a daughter mean naught? Beautiful Rush, Marc Vincenz' fifth collection, is haunted by the muse of Cassandra: the speaker acts as witness to her alienation and burden of debt ('your neck . . . Prodded / with a loan shark's knife'), an empathy attenuated by his own scientific ratiocinations as 'other' ('What's it like / to be the victim?') and offset by his own poetic and anthropologic labor ('silent grave-digging / for antediluvian bones, for crude evidence / of concerned mammals . . . and those unrepeating, / unrepeating worlds'). The burden of proof Vincenz frames first as beauty, titularly and in 'ode to beauty,' yet ultimately, as this book is scored by the hunt for truth (however impossible, as were Cassandra's words), not comfort, its speaker finds peace in the liminal, before acquiescing to the arrival not of Venus in Furs but a voice speaking in a language we are finally prepared to receive: 'you hear voices / in hard labor, / and behind closed rooms...something / like knowledge, clearing its throat.'"
—Virginia Konchan

"Marc Vincenz is one of the finest poets of his generation and has an uncanny ability to register the most subtle shifts of human interaction."
—Katia Kapovich

"Marc Vincenz's latest collection, Beautiful Rush, provides a modern take on the sublime, leading his readers to the edge repeatedly—to coastlines, sure, but also to ghosts and galaxies. The mortal and immortal live side by side in these poems, nowhere more evident than in the meditations on Cassandra and Simenon, goddess and writer. Elsewhere, cartilage appears next to suns, a broken nose by epiphany. It's easy to imagine this book 'smoking out / the origin of stars.' Vincenz's poetry has that kind of confidence, hard-won and believable, even as the lines embrace what is unknown in 'a dimmed / inarticulate world.'"
—Erica Wright