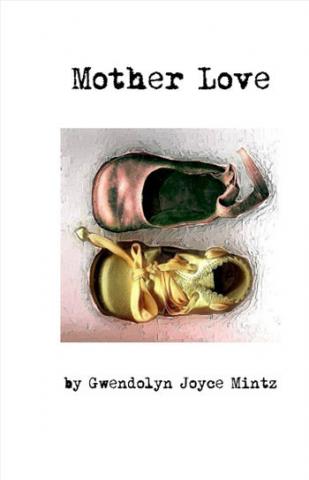 In June of 2007, Unlikely Books unveiled its first chapbook of fiction, Mother Love by Gwendolyn Joyce Mintz. With original cover art by Netherlander Daphne Butler, Mother Love offers an inebriating and nostalgic mix of dysfunction, psychosis and abuse to bring warmth to the heart of even the most traumatized reader. With that most painful of realistic styles available only when writing about filial situations, Gwendolyn Joyce Mintz uses extreme situations to remind us all of how disturbing, and how essential, every relationship is.

A single child, a boy child, of a single parent — a woman, lonely and yes, fearful — but he needed to find his own strength. She didn't want her son to cling to her, and believing it was in his best interests, she didn't want to hold on.

She wanted him to become a man unafraid to take risks; unlike his father who had been unable and unwilling to do anything lest he fall under his own mother's judgment. But — there on the news. Everyday. Another child. Amber Alerts. Innocent grins haunting you from flyers on the convenience store windows. She always bought milk in the paper cartons so he would know: Have you seen me?

He was her joy. He could be silly, though. One morning they were walking to the school and he began draping his hands over his body; the sides of his head, his shoulders, his hips. A swivel of them.

"Stop it," she'd told him, embarrassed that someone might see.

He had simply grinned and said, "What? I can't do the Macarena on the way to school?"

And he was growing up so fast! He was no longer content with her company; he wanted to play with the neighborhood boys. Outside. Trees. "Chicken" when a car approached. Jumping self-made, sky-high ramps with their skateboards.

She didn't want to nag.

"There are people in the world," she would say.

He'd mock her and reply, "There's lots of people in the world."

"— isn't a safe place anymore. Somebody might take me," he'd say, mimicking her frequent warnings.

She'd smile and jokingly say, "And I don't want them to, unless they promise they'll keep you."

Then they'd chuckle and he'd dash out the door to be with his friends. To explore. To risk. To dare.

She would stand at the screen door, knowing there was only so much she could do.

She remembered the day he got lost in Kmart. They were passing the electronics department and she told him that he couldn't stop to play the display Nintendo. She'd continued walking, glancing at the items on the ends of the aisles and then she'd turned, heading to the registers.

She'd thought he was behind her. Immediately, she panicked and strode back to electronics. He wasn't there.

"Danny!" she called, rushing to the toy department. "Daniel! Mijo!"

There were children in the aisles, stabbing the 'try me now' buttons and crashing Tonka trucks across the floor, but there was no sign of her son.

She'd rushed to the customer service counter, asked to have him paged.

"I'm going to see if he went to the car," she'd said, as she shoved aside the glass door and rushed outside.

Rushing back into the store, she was met by the concerned faces of the manager and the customer service clerk. No one had answered the page.

Her heart beat wild enough to confuse her. Daniel!

And then, as if a miracle, hadn't he appeared?

Her heart beat tears into her eyes and, though she wanted to choke him, she threw her arms about his shoulders and said, "Where were you?"

He'd laughed about her concern. He'd been in the bathroom. He hadn't heard any page.

Be careful, Daniel, her heart whispered. Be careful.

He'd lost track of the time, she thought as she walked down the block to Kenny's house. Playing video games. Climbing trees. Seeking a new adventure. Never thinking of a woman waiting back home. It had to be, she thought, something in the male gene.

A group of boys played in the street and she searched for her son, but he wasn't one of them.

But he wasn't at Kenny's. "He left about an hour ago."

Or Robbie's. "I saw him with Kenny this morning."

She walked home, each step an effort. Her cries throughout the neighborhood unanswered. She had to call someone —

"Daniel!" she yelled into the night. "Daniel!"

How she got from that moment to this one, she did not know. Who chose his clothes? He looked handsome, she thought. But he didn't look like he was sleeping. No, he looked sweet when he slept and lying there against the satin lining, he simply looked unreal.

But there was one moment, when a sliver of her anger cut through, and she wanted to scream at him — Why didn't you listen to me? — momentarily feeling as though he'd gotten what he deserved.

Mother Love is no longer for sale, but you can download it free!