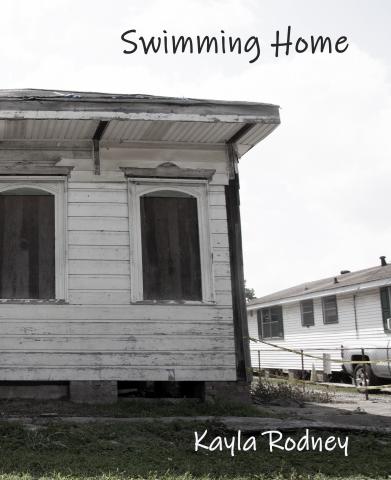 Unlikely Books is privileged and honored to release the first book by New Orleans poet Kayla Rodney. Kayla engineered this book over a period of years, carefully crafting her memories, feelings, and analyses of Hurricane Katrina, other New Orleans storms, and growing up and learning to love in New Orleans. With a cover photograph by Leona Strassberg Steiner, Art Director for Unlikely Books, Swimming Home is a beautiful catalog of trauma, recovery, and triumph.

Whenever I return from traveling a long time outside of New Orleans, the first things I realize I’ve missed are the sounds of its many voices, inflected as they are by histories of love, conflict, grief, celebration, and, in spite or because of so much, belonging. Those are the voices that I hear in Kayla Rodney’s beautiful debut collection, Swimming Home. Rodney’s eye takes in the mundane and renders it for us as magical, mythical, as strange, graceful, and homely as the brown pelican swooping in throughout the book. For this poet, huge events, particularly Hurricane Katrina, have transformed the most ordinary things—from the food of a New Orleans seafood boil to the trash blowing down our streets—into poignant and often funny rarities. Kayla Rodney has come to show you something truly special—swim home with her.

And check out the Foreword by Dr. Biljana D. Obradović of Xavier University:

Kayla Rodney and I first met at the Historically Black Xavier University of Louisiana, in New Orleans, when she came by the Department of English booth before starting classes in Fall 2009. A New Orleans native, Kayla had come to Xavier from Lusher Charter High School, where she studied with the poet, Brad Richard. Right away, I knew that there was something special about her.

At Xavier, Kayla majored in English and minored in Creative Writing. She graduated in Spring 2013 with an incredible poetry thesis called Dry Bones, with me as thesis advisor. After that, she went on to receive an MFA in Creative Writing with a concentration in poetry from San Diego State University three years later. Th ere she studied with Ilya Kaminsky, Sherwin Bitsui, Sandra Alcosser and Marylin Chin. She is currently at the University of Florida, where, at the time of writing, she’s completed all but her dissertation, studying for a Ph.D. in English, concentrating on African American literature with a focus on race and education.

Swimming Home is her first collection of poetry, with—I am sure—many more to come. In this collection, I can see traces of her Xavier thesis, especially its focus on Greek mythology. Back at Xavier she also loved the persona poet Ai, but there aren’t that many persona poems in this new collection. She mostly speaks from her own experience, except for poems in which she speaks for the citizens of New Orleans and our struggle with hurricanes, heat, humidity, and all that goes along with it.

Having survived many hurricanes in the past twenty-five years of living in New Orleans, including Katrina in 2005, I, like most of us, remember and still occasionally see bumper stickers that sprang up after the storm: “Proud to Swim Home.” It speaks of the resilience and determination of New Orleanians to rebuild our city in spite of massive fl ooding, a breached levee, wind damage and, of course, the politics. Fourteen years since Katrina we’re still dealing with PTSD, reliving the horror each time we see the weather forecast and a new storm beginning to form, trying to swirl, heading our way. We have packed bags, ready to go in August each year. We know what it means to leave, evacuate, what it means to return in rubber boots and with masks, what it means to gut our homes, throw our precious belongings out onto the street and start over. We cannot forget what happened. But we also “know what it means to miss New Orleans,” when we are away from it. We love it and we hate it. We can’t live without it. We are determined to return to our city, even if it means for us to swim home through the flooded streets. Th ere is a charm about this city that one cannot help but fall in love with. Th is is Kayla Rodney’s home town and she will swim back to it if she has to, as will we all.

The poems in this collection show Kayla’s love for the Crescent City and its peculiarities right from the start in “Making Groceries,” a term used by people here for grocery shopping. She speaks of our living below sea level, in a bowl. She talks about the New Orleans food for which the city is famous. She talks about the city’s geography—the street names, the wards, and the West Bank of the Mississippi River (which almost never floods). She also talks about what happens when it starts raining too much, how we lose power and have to stay in the dark with only candlelight and how we must not open the fridge door as all the food will be spoiled. Th e beautiful buoys swell, then begin flooding the streets. We just have to stay put, wait for the water to recede or leave before it starts flooding, evacuate. Those who stay better have a hatchet or an axe to cut their way through their attics to the roofs in order to avoid drowning when the waters rise.

She also speaks of New Orleans’ history of Creoles and Cajuns, of African Americans and the “Black Holocaust” they endured. She speaks of plaçage and of passé blanc and what that meant and means. She also speaks of voodoo, a tradition still prevalent in the city today.

Most of these poems are in free verse, but she does have a sonnet as well as a list/catalogue poem and several process poems. It is clear that she has studied contemporary poetry and the craft for many years. She continues the work of her thesis with her exceptional use of mythology, transforming some of those thesis poems into new forms for this collection. Th e Odysseus myth is weaved throughout, here. Odysseus, Calypso, Penelope, Athena appear and reappear, and are woven into the mythology of the city of New Orleans. New Orleans is not an island, but we are located between Lake Pontchartrain, the Gulf of Mexico, and the swamps, so we might as well be. We, like Odysseus, are detained here, as if by Calypso, and only the gods like Athena or Zeus can help us escape. Kayla weaves these myths in skillfully, enchanting her readers, as if Calypso, or a mother, weaving and combing her daughter’s hair on their porch.

Many outsiders have been trying to write about and take advantage of our strife during Katrina, but there’s nothing that can compare to the knowledge of those who live here. Since we went through the hurricane, many New Orleanian writers could not write about it soon after. It has taken Kayla Rodney fourteen years since we crossed paths with Katrina to process its impact. She’s created a book that makes us proud to be New Orleanians as I am proud to have had her as a student. You will not be disappointed.