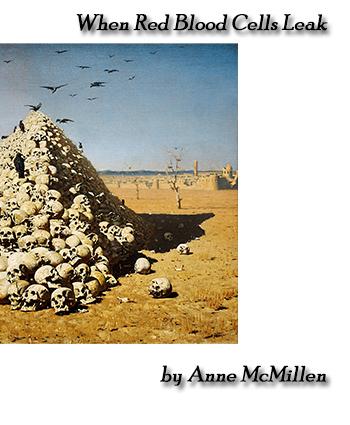 Buy it on Amazon

Way back in 2005, when Unlikely Books was an unnamed arm of Unlikely 2.0, we released our second chapbook: When Red Blood Cells Leak by Anne McMillen, the old-school Unlikely Stories contributor formerly known as Annie M. When Red Blood Cells Leak is beautifully ugly journey into hatred of the self, hatred of the other, and too much sex with both. Fascinating, horrifying, and sublimely depressing, this chapbook will leave you with the uncomfortable, guilty feeling that all modern human interaction should.

The 2017 Edition of When Red Blood Cells Leak features a new cover with Vasily Vereshchagin's 1871 painting "The Apotheosis of War."

see you at the mayo health clinic

promiscuity verse safety...hey—don't you know
a.i.d.s. is just a word baby,
like love, accident, forgot, too drunk to care, overly timid couldn't say no, too weak to
commit suicide the right way but unintentional infection via an infectious slow
killing disease looks better on my resume when i reach the rusty gates of heaven than
hung myself in the bathroom/unwantingly shit all over myself
so the mortician had to scrape it off my legs and wash my asshole
that i wouldn't stench from my ten shot gun full marine encore performance funeral.

recklessness
climbs on top of
desperation. climaxed together.
in the multitudinous moments of destitution
ever notice how
gonna go get laid sounds a lot like
gonna go get aids?

every line
goes back to
the lepers,
in colonies now called
communities.

what you don't speak so easily,
truth that turns into a bacterial spiral.

one real hip mother fucker
in this ultra sweat shop advocating pop masturbatory media frenzied
celebratory of the intellectual
six feet below ground
magazine
was ragging in his article
"those writers/poets new age escapists"—always bashing the government or god
parents and the bitching
about some lost love lorn fooly hardy-ish preteen
no breast before legal age of consent
fantasy.
its getting old.
maybe that/this is
why
even the most avid high riding mao amongst our
coffee crusading mongoliod invasion into the third world
of the mind
can't stand to read. doesn't want to listen.
no one is ever listening
when it's/was it's
important.
everyone is/was busy working
will continue to be so.

support the status quo
unintentionally. bastion it outright. don't ask questions
no one wants to know
what happened or didn't happen.
everyone wants it to stay
stuck in your
throat until the virus spreads through
out the whole.